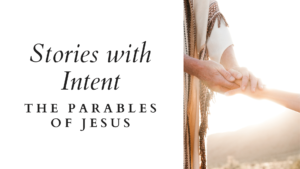 “As part of his campaign, Jesus told stories…They were, for the most part, not simply ‘illustrations’ to decorate an abstract thought or complicated teaching. If anything, they were the opposite. Jesus’ stories are designed to tease, to clothe the shocking and revolutionary message about God’s Kingdom in garb that would leave the listeners wondering, trying to think it out. They were stories that eventually caused Israel’s leaders to decode his rich message in such a way as to frame a charge against him, either of blasphemy, sedition, or ‘leading the people astray.’ Whatever the parables are, they are not, as children are sometimes taught in Sunday school, ‘earthly stories with heavenly meaning.’ Rather, they are expressions of Jesus’ shocking announcement that God’s Kingdom was arriving on earth as in heaven.” – NT Wright, Simply Jesus

There is perhaps no more characteristic feature of Jesus’ teaching than his parables, and no aspect of his teaching is more memorable and influential than these vivid stories. Yet the parables aren’t simply a clever way that Jesus taught moral and ethical truths. They are an expression in the service of his announcement of the kingdom of God. Parables were the means Jesus used most frequently to explain the kingdom of God, to show the character of God, and to illustrate the expectations that God has for humans. The parables often were prompted by Jesus’ need to explain what he was saying and doing with the rest of his mission. In other words, what Jesus was saying and doing prompted questions, and many of the parables are his response to those questions. Why does this man eat with sinners and tax collectors? Why does he heal on the Sabbath? Why does he spend so much time with undesirable people? The parables are necessary explainers, but they invite us to investigate more. They do that as much as they make anything clear. Nevertheless, some parables are clear as bells, and, while we may discuss backgrounds in length, they do not need explanation so much as implementation. They in effect say to us, “Stop resisting and do it,” or “Believe it and pursue it,” or “Go and do likewise.” For example, we don’t need much commentary to know the intent of the parable of the Good Samaritan. Despite the numerous studies of this parable, the story at its core compels us to stop resisting and to live its message.

Still today, the parables need to be allowed to speak, and they need to be heard. How did Jesus seek to change attitudes and behaviors with this parable? How will it change our own? Ultimately, the parables of Jesus are stories with intent. And the intent of the teller—Jesus himself—with all the power and creativity of his teaching is the goal of our understanding. These stories invite us into a new view of reality, and they deserve a fresh hearing from people who are ready to learn and follow Jesus’ instruction.